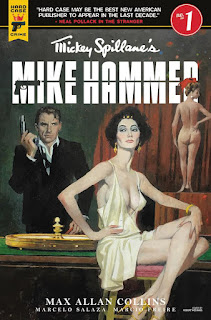 Mike Hammer is a man of his word, and he kept his promise to kill the person who had a friend of his killed for the money. But now some time has gone by, and a new client is putting Mike on the wrong side of a local crime boss. There’s also a damsel in distress, and gallant Mike gets her out safely. But he had to kill to do it, and now he wants to know why.

As a longtime fan, I’m elated to see Mike Hammer coming to the world of comics. It’s a great medium for crime stories, and Hammer is a great noir character. I can’t think of any better hands than Collins for him to be in, either. This is based on an unfinished story by Mickey Spillane, and it also has some delightful art, with just the right darkness of atmosphere.

Hammer is one of the original hard-boiled private eyes, dating back to the ‘40s. He’s big, he’s tough, and he’s a bundle of trouble for the bad guys. And it’s awesome to see him back in action. Go check him out.

MICKEY SPILLANE’S MIKE HAMMER #1 is available now from your local comic shop, or online at titan-comics.com.