For What It's Worth: The Return of Jason Todd

This week marked the introduction of Jason Todd into the new DC universe in the new book Red Hood and the Outlaws. It's remarkable that there are so many Jason/Red hood fans out there but I'm reminded that the difference between the fans who voted to kill/not kill him back in 1988-1989 was only 72 votes. But let's go over his history a little bit...

Pre-Crisis
For some strange reason, they gave Jason the same origin as Dick - a member of a family acrobatic team that was employed in a circus. Instead of a crime boss being responsible for the deaths of Jason's parents, it was Killer Croc. The other difference was he had strawberry blond hair which was dyed black when he assumed the mantle (they never did explain how others must have responded to such a move in the civilian world. Hmmm...) To be quite honest, not an interesting character.

Post-Crisis
NOW he's interesting. Jason is an orphan living on the streets. Batman becomes aware of him due to the boy trying to steal the wheels of the Batmobile (pair of brass ones there). Bruce decides to channel his anger to more productive uses and possibly saving him. Well, needless to say, that didn't work. He crossed the line several times, including the incident in issue #424 where he may/may not pushed a serial rapist off a balcony and fall 22 stories to his death. Well, the fans had enough, so given the chance during the famous A Death in the Family arc - well, you know ...

You had me up to here. I didn't mind the aggressive, anger-filled Robin, but his death is Bruce's greatest failure as Batman. Not everybody can be saved, but we all have to come to realize that at some point in our lives, this was Bruce's time. The fact that he put a copy of the uniform as a memorial in the Batcave serves as a reminder to him. Then Tim Drake came and made Bruce realize that Batman needs a Robin to be balanced (some fans will debate that, but not me).

Hush Story Arc
If you've read the Hush story line by Jeph Loeb and Jim Lee, when you got to that scene you had to be saying the same thing I did - "WTF?" Of course, we find out that it was not him (sorry to spoil that for you if you hadn't read it, which you should). But it was a great twist not only on Bruce, but for the readers as well. 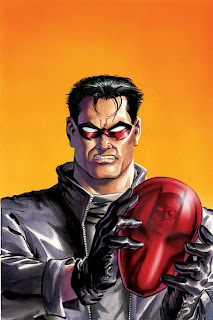 Red Hood
Now why Judd Winick wanted to bring him back, I don't know. Not only is Jason back, he's using the costumed identity of a person who later became Batman's greatest nemesis - The Joker. Why? To give stick the knife into Bruce a little deeper? Probably. He walks the fine line between criminal and anti-hero (or is that the same?).

Jason's Identity Crisis
Then things really get messed up: he decides to become Nightwing. The reason was because it was someone's idea (won't say who) to kill off Dick Grayson. I will mention that same gentleman wanted the Silver Age Flash and Green Lantern back, but wanted to off the Golden Age Robin because he was boring and repetitive. Fans responded to the news and things changed. So Jason became Red Robin, which lasted a second or two and now that identity belongs to Tim Drake (Jason's successor to the Robin mantle). Then when Bruce "died," he came up with his own Batman uniform and punished the criminals. Thank God that didn't last long. The Crimson Duo
The next time we see Jason, he's wearing a super heroic uniform as the Red Hood with his own Robin - Scarlet. His approach is still the same - kill or seriously hurt the criminals. Cross the line that Bruce never dared. Yeah, this ended well too...

DCnU
So now we have him with "The Outlaws," primarily Green Arrow's former sidekick Speedy, now known as Arsenal, and Starfire the former alien princess turned slave, turned.... How well will this go? Who knows.

My thoughts
I don't care for Jason. I thought it was stupid to bring him back. But I'm in the minority. I will grant you that either way he's a symbol of Bruce's greatest failure, but still ...I wish he was still dead!

What do you think? Let us know!