For What It's Worth: The New Superman Curses? UPDATED

UPDATE: Morrison has cleared up the issue regarding the "GD" issue. It is indeed a groan.
It's been a nice, lazy day. I finished reading Action Comics #1 by the creative team of Grant Morrison and Rags Morales. I jump online and lo and behold, a controversy regarding the book I just read!

Bleeding Cool has a post regarding a North Carolina comic book store banning Action Comics and anything written by Grant Morrison. I thought to myself, "whoa, what did I miss in the comic that would be offensive?" Well my friends, here is the panel in question... 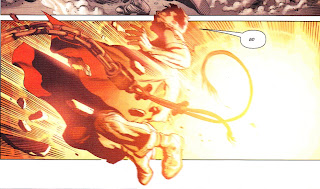 Now, the owner (a Christian) takes offense to what Supes is saying. It's not clear to what he thinks but the assumption is either God, or Goddamn. O... K. Whatever dude. Here is the page in full (thanks again to Bleeding Cool)... 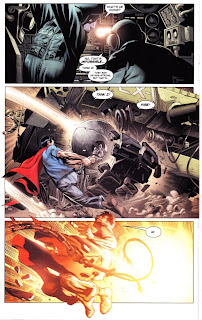 He's taking a hit by a tank, he's not going to say "Spring is here!" I give Morrison credit for not doing the traditional "OOF!" or "UGH!" or something similar. I think this guy was looking for an excuse. Oh, he apparently sells Preacher, Crossed, and The Boys. Those aren't very Christian books by the way. And all written by Garth Ennis. Hmmm... Conspiracy! I don't know. It's his right to do that just like it's his customers' right to stop buying comics there. Is he serious, or is it a ploy to get free publicity? Only he knows.