I don't normally do reviews (yes I did some for Clean Dallas.com, but that was awhile back), but this is a piece of history (unless it's gets retconned out) so I think it's worth chronicling it. And I'll try to do it without a ton of spoilers. So, without further ado, here we go...

Green Lantern travels to Gotham in answer to an order he received from the ring. He encounters Batman for the first time. Batman Bats is chasing...someone (or something), while being pursued by Gotham police. The two size each other up (funny scene with Batman being able to pull the ring off Lantern's finger and examine it).

The two realize that the incident they were investigating could have ties to another one in Metropolis and fly there. Of course, being Metropolis, they run into Superman...to be continued. There is a secondary story involving Victor Stone playing football and being scouted. So obviously, we will see him become Cyborg at some point down the line.  The comic ends with a few pages of initial redesigns of the costumes and the process of doing the cover.

OK, here are my thoughts. DC was in a no-win situation here. The expectations were very high for this book, so some people were bound to be disappointed. If the team was together from the get-go, readers would have complained about not seeing the team formed. So, they took the other approach. 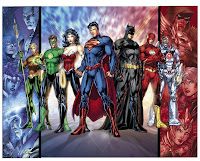 I thought the book was OK, not great (and not worth the extra $1). It read like a first chapter of a story arc written for trade paperback (something Dan Didio said they were getting away from). This is a criticism I have about Geoff Johns. I thought Brightest Day maxi-series could have been shorter, but I'm not a writer. I know Jim Lee gets a lot of complaints, but I generally like his work. Some of the new costume designs I don't particularly care for, but they didn't ask for my approval.

I know things will pick up once the team is together, so I'll stick it out. I mean, it's only been one issue.