For What it's Worth: The Batman Movie Reboot - Bring in Robin

I've been thinking about  the eventual Batman film franchise reboot that we will get after The Dark Knight Rises. I want to see something different this time. So, I figured what we need to do is bring in Robin, the Boy Wonder. Now, before you start shaking your head and groan, hear me out. We've pretty much seen the lone, brooding vigilante and it's getting old. I mean, I enjoyed the Nolan and Burton films (that's the only ones I'll mention), but it's time for a change.

The focus of the first film should be setting up Robin. We know Bruce's origin by heart, and it still can be mentioned as an exposition, but it's Dick's story. And....(drum roll) no super villain. We can worry about which member of the rogue's gallery will appear later. You have Haley's Circus, you have the Flying Graysons, you have Boss Zucco (who's the baddie in this) and you have Robin.

Here's another bold suggestion, cast a teen actor. Don't get someone who's 30 to act like he's 20. Don't think will work, huh? I've got two words for you....HIT GIRL.

No one seemed to have a problem about a tween putting on a costume, cursing like a sailor and killing bad guys left and right in the film Kick Ass. As a matter of fact, I heard no complaints, and in the days of the internet, I think I would have heard/read some if they were there.

Now, the issue with the costume. I love the original version, but you can't have a hero run around in black armor and his sidekick running around with no protection for the arms and legs. Batman: The Animated Series, Teen Titans Go!, and Young Justice cartoons had Dick running around in what essentially is Tim Drake's uniform. While I love the outfit, I look at it and say it's Tim, not Dick. Even the movies which I will not speak it's names used a variation of Tim Drake's outfit. My suggestion: use the concept art by Alex Ross - 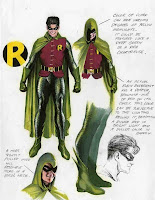 It captures the classic look, but is more protective and isn't based on another character's outfit. He even muted the colors so Robin can hide in the shadows better.

Well, that's what I would do, but what do I know? What are your thoughts?