For What It's Worth: My Choices of Villains for a JLA Movie

With the successful Batman reboot, a Superman reboot on the way a Green Lantern movie this summer and a Flash movie in development, Justice League fans' hopes are high about a possible movie in the future. Hopes seem even more bright with the fact that Marvel will have an Avengers movie out in 2012. So...for sake of discussion, let's say Warner Brothers has announced a Justice League movie. Who would be the villain(s)? The obvious thing to do would be the Injustice League or Secret Society of Super-Villains and gather the villains that have been used in the individual movies. It's safe, but unoriginal. Here are some of my choices to be foes for the JLA... 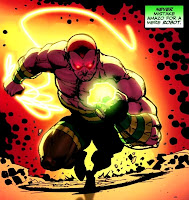 Amazo -the android that has the ability to duplicate the powers of metahumans. Certainly not a walk in the park for our heroes.

Dr. Destiny - A evil scientist that created a device which allowed him to create reality from the fabric of dreams. Not a threat? I suggest reading "Justice League: A Midsummer's Nightmare." 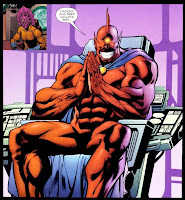 Despero - alien from the planet Kalanor, and in addition to a genius intellect possesses a third eye on his forehead capable of hypnotism, illusions, telekinesis and telepathy. He originally appeared average build, but now appears to be of a physical threat as well.

Prometheus - or as I call him "the Anti-Batman." A son of criminals who were shot dead by police in front of him, he made a vow to "annihilate the forces of justice." He uses an extensive range of equipment and technology as well as being tough mentally and physically. Common tools include body armor; gauntlets that fire various projectiles, and a helmet that download the knowledge and physical skills of others directly into his brain.

Eclipso-The incarnation of the Wrath of God and the Angel of Vengeance who turned evil and was replaced by the Spectre. Eclipso's ability to possess one who touches the cursed diamonds makes him a big threat. Imagine the League battling a possessed Superman on the big screen. :)


That's a few of my suggestions. I'm sure you have your own. Let's hope we get to see a Justice League movie!!!!!