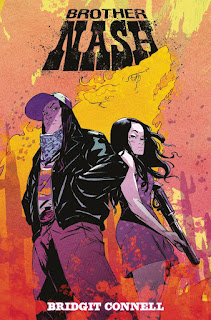 The Fellowship was fortunate enough to obtain a copy of BROTHER NASH #1 from Titan Comics. Bridgit Connell writes, draws, colors, and letters.

Nash drives a truck, and one day in Arizona he picks up a hitchhiker named Hernando. Hernando has a mission, and he sees Nash as an easy target. But what he doesn’t know is that Nash is much, much more than a truck driver. He’s a bit of a legend in the southwest, and I mean that in a supernatural sense. Something strange is stirring on the highways of Arizona tonight, and Hernando may be in over his head.

Don’t get me wrong, this is very much Nash’s story. Turns out he’s a great guy, with friends of all kinds scattered throughout the southwest. And he’s been around for a minute, too. He’s got some interesting “open secrets” as well, and a fascinating story around him. And the art handles the supernatural elements very well, while playing with color and distortion beautifully.

This huge first issue has a lot of worldbuilding to do, and learning about Nash and his “neighborhood” is a real treat. Seems like he might get to learn some things about himself on this journey, too. So stick out your thumb and climb aboard now.

BROTHER NASH #1 is available now from your local comic shop, or online at titan-comics.com.