For What It’s Worth: Leia’s Fate (Updated) 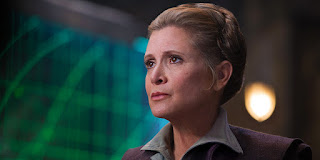 UPDATE: Lucasfilm has released the following statement on 1/13/17:


We don’t normally respond to fan or press speculation, but there is a rumor circulating that we would like to address. We want to assure our fans that Lucasfilm has no plans to digitally recreate Carrie Fisher’s performance as Princess or General Leia Organa.

ORIGINAL POST:
Carrie Fisher was, is, and always will be a part of the Lucasfilm family. She was our princess, our general, and more importantly, our friend. We are still hurting from her loss. We cherish her memory and legacy as Princess Leia, and will always strive to honor everything she gave to Star Wars.

As you no doubt seen online, there will be a meeting next week on how to deal handle General Leia’s role in Episode IX with the passing of actress Carrie Fisher on December 27th. Everybody has an opinion, and so do I. But let’s look at this logically, realistically, and do what’s best.

Given what information has come out, Leia has a bigger role in Episode VIII and presumably in Episode IX. Two scenes have been mentioned: the reunion with her brother Luke (played by Mark Hamill), and a confrontation with her son Ben/Kylo Ren (played by Adam Driver). One would assume that former will be seen in the next film, leaving the latter to be in the final installment of this trilogy.

So with that, let’s look at our options (bear in mind that you cannot please everybody):
I don’t envy the decision that Lucasfilm has ahead of them. All I ask is that they honor the Princess that has become an icon for so many people, and the incredible woman that brought her to life.

Rest in Peace, Carrie. We love you and will miss you.
Posted by Thomas
Email ThisBlogThis!Share to TwitterShare to FacebookShare to Pinterest
Newer Post Older Post Home