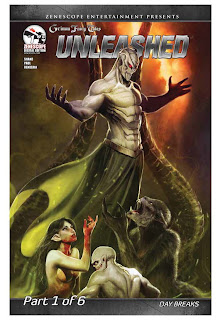 A being of great power has flung open the gates between our world and the Shadowlands, loosing all of the monsters who were imprisoned there. The handful of heroes who were trapped there have also returned, and they’re starting to find Sela (making for some awkward moments). The chaos is quickly spreading, and many other powers seem confused by it all. What will it take to fix this? Or can it be fixed at all?

With their fascinating universe of characters and worlds still widening, the creative minds at Zenescope have pulled together to construct the biggest event they’ve ever mustered. And in this opening salvo of the war, we get some idea how huge and powerful our unnamed foe really is. Sela has suspected its existence, and has started trying to track it, but now it’s coming straight to her. Its goal seems to be to conquer Earth, so we’ll see how far it gets with Sela in its way. An event like this can really shake the foundations of the entire storyline, and I’m very interested in seeing how much they’re willing to alter in their grand scheme.

The Zenescope gang is really pulling out the stops with this one. It’s big, and it looks like it will be a really exciting ride. Count me in.

GRIMM FAIRY TALES: UNLEASHED #1 is available now at your FLCS or by order at zenescope.com.