The Fellowship was fortunate enough to obtain a copy of BLOODSTRIKE #27 from Image Comics. Tim Seeley writes, Francesco Caston draws and colors, and Crank! letters. 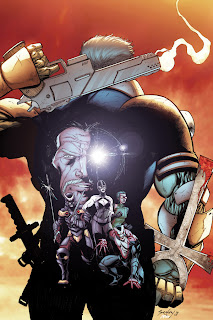 Many things that have inconvenienced Cabbot Stone over the years, but his death hasn’t really made the list. He’s still kicking, and he’s got an impressive support organization behind him. Right now, though, he’s also got an ancient force trying to induct him into their religion, and his organization is having trouble working out the kinks in their processes. And then there are the bugs…

Undead supers. Not just mindless zombies, thank goodness. But real super-powered people being brought back from the dead to keep fighting. Stone is a likable character, though I suspect not a very deep one. I don’t really think he needs to be, though. Dr. Rein strikes me as a more interesting long-term character study (though maybe that makes me weird). We’ll just have to see how that unfolds.

This looks like a well-established book (coming from Rob Liefeld that’s no surprise, of course) with some intrigue to go along with the action. I’m going to keep an eye on this one.

BLOODSTRIKE #27 is available now at your FLCS or by order from imagecomics.com.