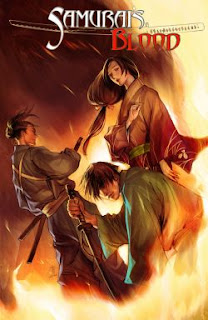 This trade paperback collects the six-issue storyline which follows the exploits of three young people in feudal . Clan Sanjo is betrayed and decimated, and it’s up to the last two survivors of the clan to avenge those who captured their lands. Their close friend joins them on their quest and learns a great deal about himself along the way.

It becomes quickly obvious (at least it did for me) that Mr. Wiseman has studied Japanese culture carefully. This work has a deeply authentic feel to it; a great deal of attention is paid to the emotions and philosophies of the characters, and the story’s focus on samurai culture is enhanced by the cracks in it that the characters sometimes fall through. It also helps greatly that the art is so well suited to the subject matter; Mr. Kim’s work is expressive and beautiful.

This is a visually stunning book, with a compelling story and rich characters. Pardon the cliché, but I really couldn’t put it down. I’m very much looking forward to the next story from this team.

SAMURAI’S BLOOD Volume 1 is available now at your FLCS or by order from imagecomics.com.