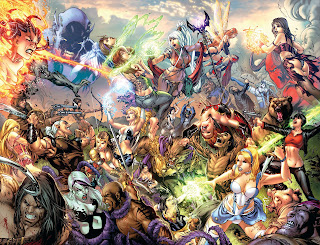 This trade paperback compiles chapters 7 through 12, the final chapters, of this time- and world-spanning odyssey. Several different ‘heroes’ are moving toward a common goal: saving the world from the Dream Eater. This volume gives us the epic culmination of those goals, and some dramatic foreshadowing as well…

The story here is not complicated: save the world from big, nasty supernatural forces. But it’s done over several titles, with enough diverse characters and story threads to make it interesting. All of the threads come together for the ‘boss fight’ at the end, and the alliances almost collapse a couple of times, which I found refreshingly realistic. The art is visually striking (for the most part; there is some variance since so many varied artists are involved) but overall adds to the world nicely.

I like how the story is brought together, and I think Zenescope has built a fascinating multiverse here.

GRIMM FAIRY TALES: THE DREAM EATER SAGA Volume 2 is coming soon to your FLCS or by order from zenescope.com.