For What It's Worth: Who Makes Up Marvel's Trinity?

This question has been asked before, heck we even briefly discussed it on our last broadcast. Who does make up Marvel's Trinity? Well, to lay down the ground rules, let's look at DC's Trinity...

In order by chronological order: Superman, Batman, and Wonder Woman. All have stand the test of time, all very popular, and easily identifiable. You look at a picture or drawing and you know who that is. I'm not sure where the whole Trinity thing came from, but it's pretty much accepted that these three are DC's Trinity.

Now, let's take what I have mentioned regarding DC's Trinity as a basis for Marvel's version...

Longevity - Here is a list of heroes that have been going strong since the 60's: Spider-Man, Daredevil, Iron Man, Hulk, and Thor. Captain America came back in the 60's and has been around since. I do not include the Fantastic Four or original X-Men as they were more known in the group than a solo character like the others (and the DC Trinity).

Popularity - Well, the above characters still fit, but the likes of Wolverine, Punisher and Deadpool are just as popular. All have solo books and even movies (well, Deadpool's movie is on the way).

Easily Identified - Once again, the original list (Spider-Man, Thor, Captain America, Daredevil, Hulk, Iron Man) fits. Wolverine might be on this too because he is highly visible. Punisher and Deadpool, while identifiable in the comic book world,aren't so much to the general public.

So....with all that said, who would I say would make up Marvel's Trinity? 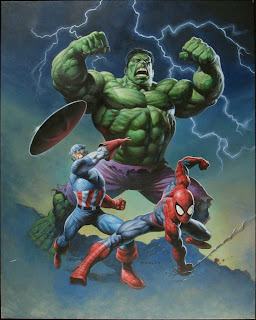 Spider-Man, Captain America and the Hulk

How sold am I on these choices? Spider-Man 100%, Captain America 99%, Hulk...90%. I could possibly be swayed by arguments for Thor or Iron Man (maybe even Wolverine...MAYBE), but this is the trio I think fits the Trinity. It's funny, I see some parallels between the two trinities...

Cap/Supes - the natural leader that everybody aspires to be.
Bats/Spidey - kind of the every man, the loner who seems to be on all the teams
WW/Hulk - the under-appreciated hero (and both having problems with live action adaptations)

Well, for what it's worth, that's my trinity. You agree? Disagree? Have other suggestions?
Let us know!